Our first homeschooling year was 2015-2016. We both, me and my daughter Anna, packed 2 backpacks and flew to Malaysia. With a one-way ticket. Anna actually had to go to 4th grade. I decided to teach my daughter myself. I had no experience with teaching and generally never wanted to teach anyone. I don't have the patience for it. 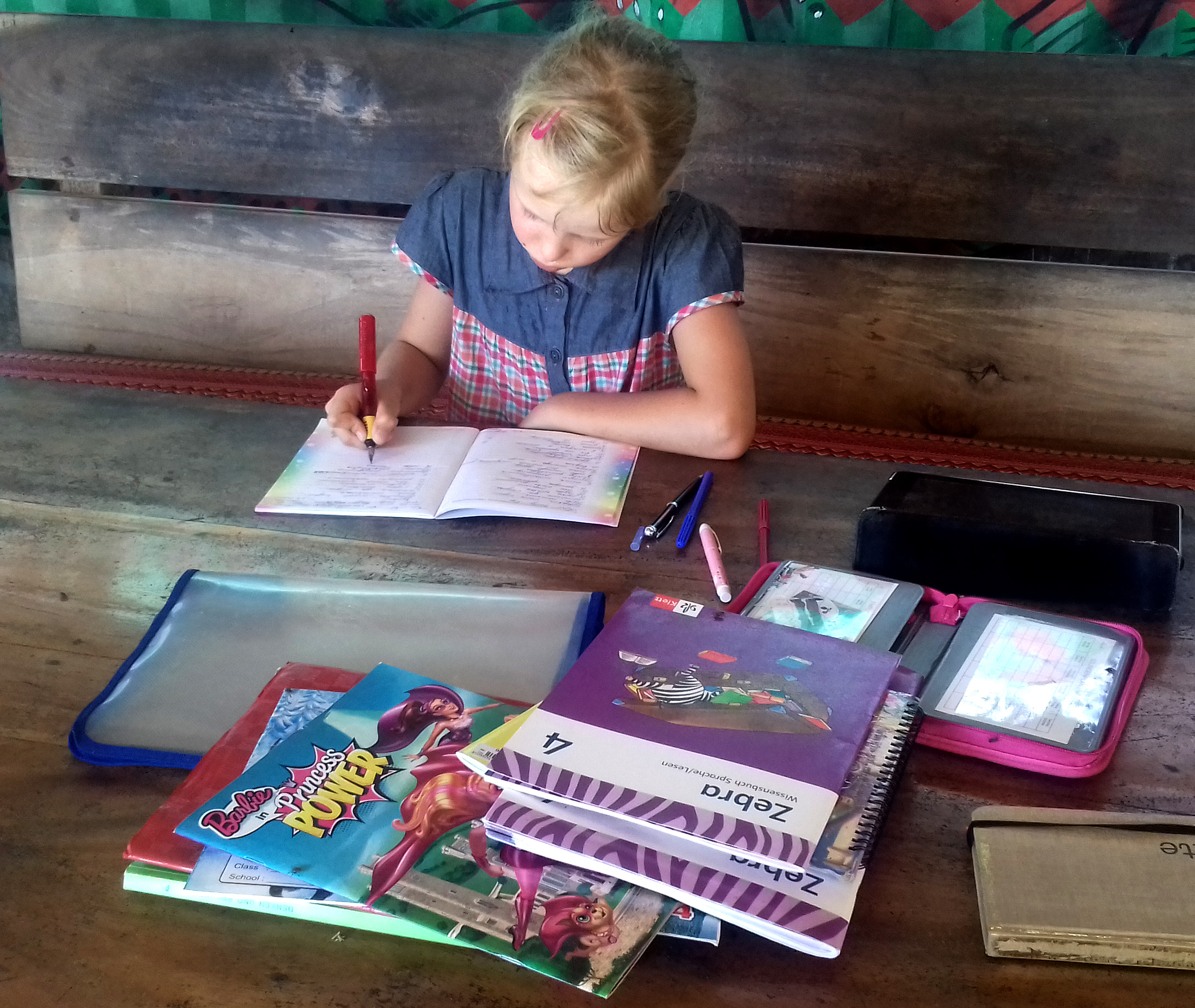 The disappointment came very fast, in the first week. When I realized ...

1) After 3 school years in Berlin my daughter was still struggling with multiplication table. We were in a taxi in Malaysia and I asked her to calculate 5 X 10. She couldn't.  I almost freaked out!

3) She didn't like any subject. She only learned something under pressure ...

I decided to focus on 3 subjects only: German language, Mathematics and Russian language. In our everyday travel life Anna was automatically learning many new things - this counted as "general studies". Walking in towns and villages with backpacks or swimming in the ocean - this was our sport class. Making videos and taking pictures for our documentary film - it was Anna's art class. Anna learned English by communicating with people we met on the way. Anna  developed a great love for museums, so we visited hundreds  of museums - in our school this counted as "cultural studies, religion classes, history and science". 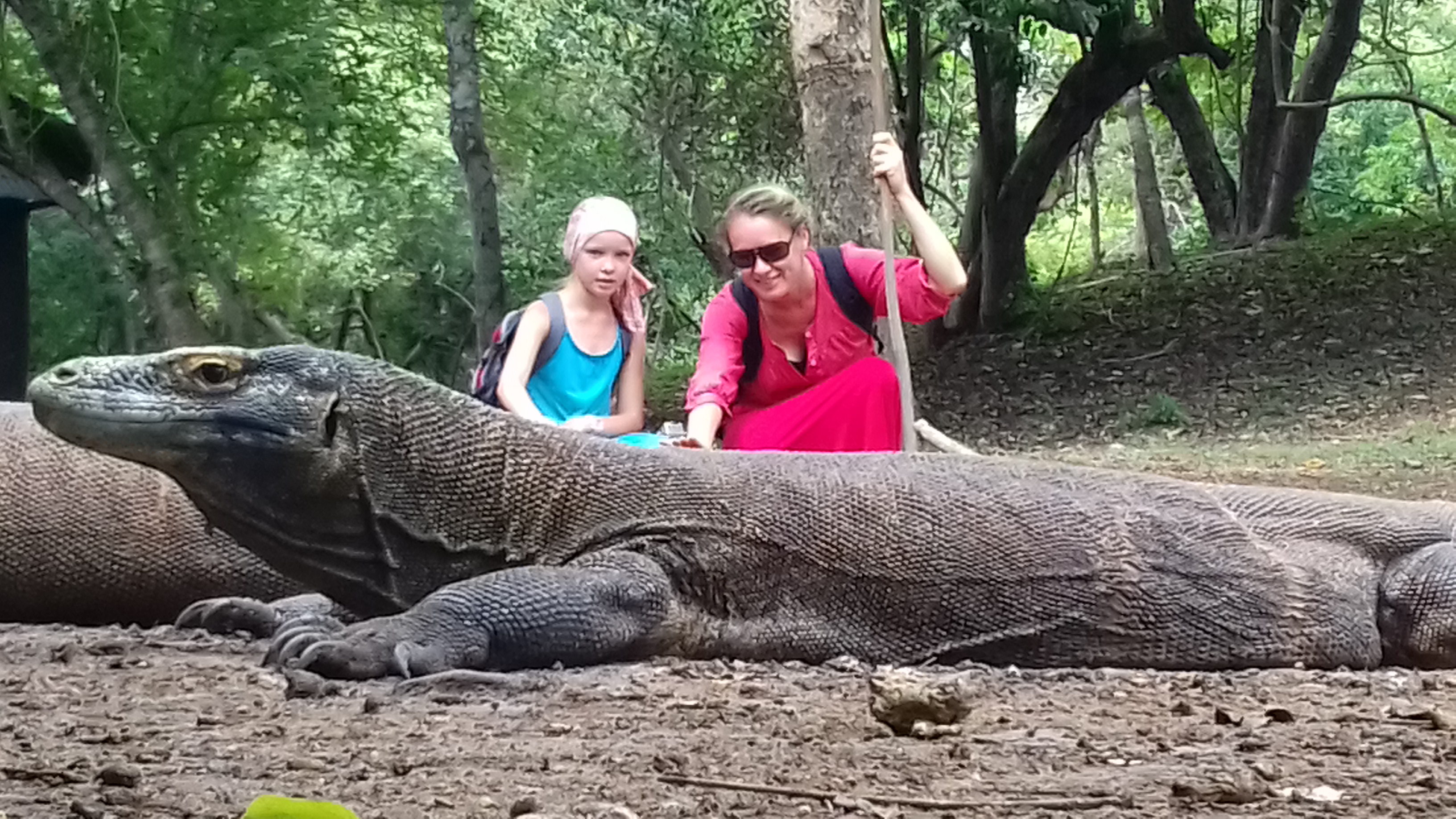 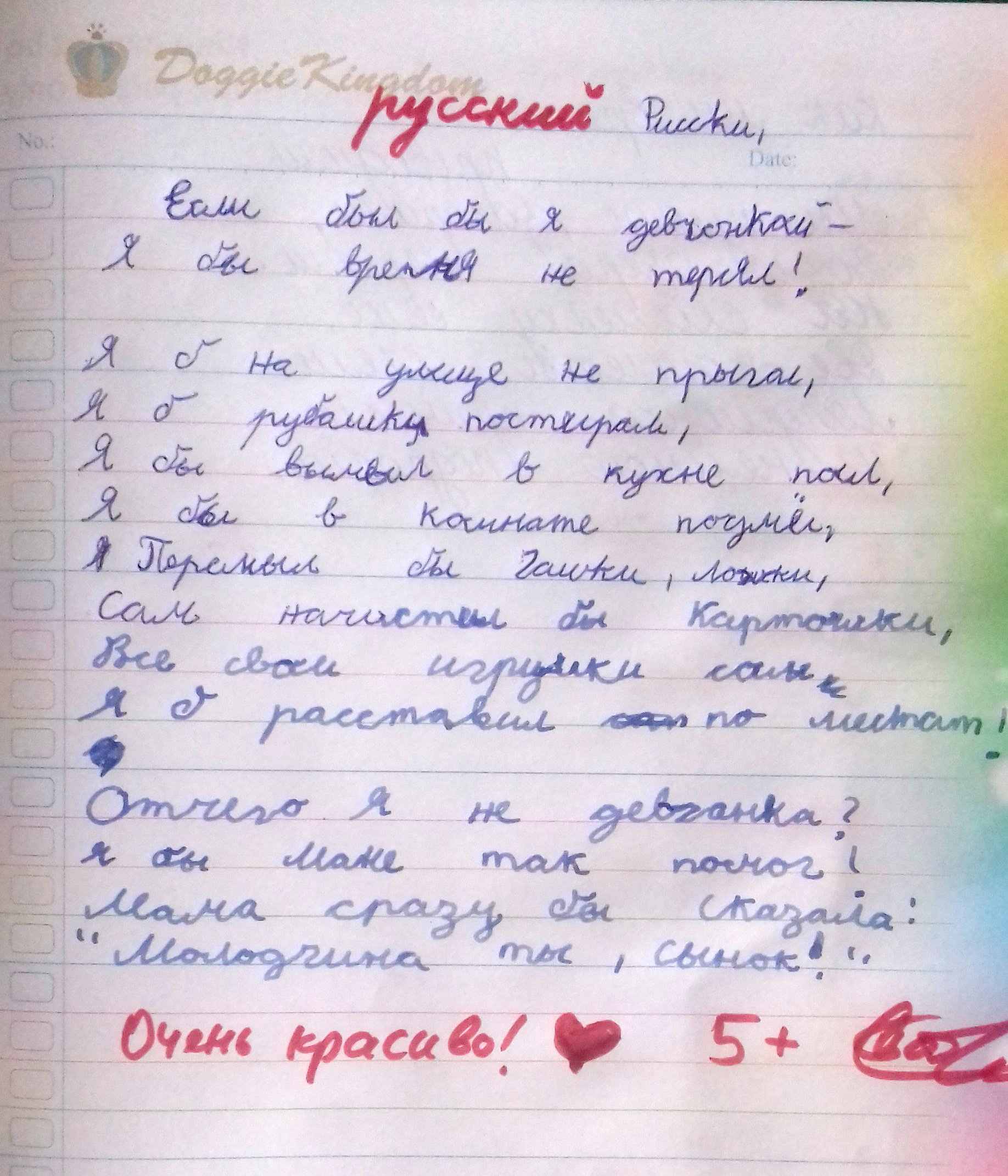 Our "school" took maximum 2 hours a day. The learning times were flexible, the "lessons" took place wherever it was possible: in hotels, on trains, in buses, in the jungle, on the beach. I decided to skip learning grammar rules in languages and to focus on developing an "language - intuition" and love for languages. So Anna didn't have to learn any grammatical rules in any of the 3 languages ​​(German, Russian and English). I was convinced and I still believe it -  it is much more important to develop a strong positive motivation an joy for learning and speaking languages. Anna read many books, listened to audio books, wrote her own stories, painted and scribbled in her colorful workbooks. She made her mistakes, but day by day she corrected them herself and intuitively. 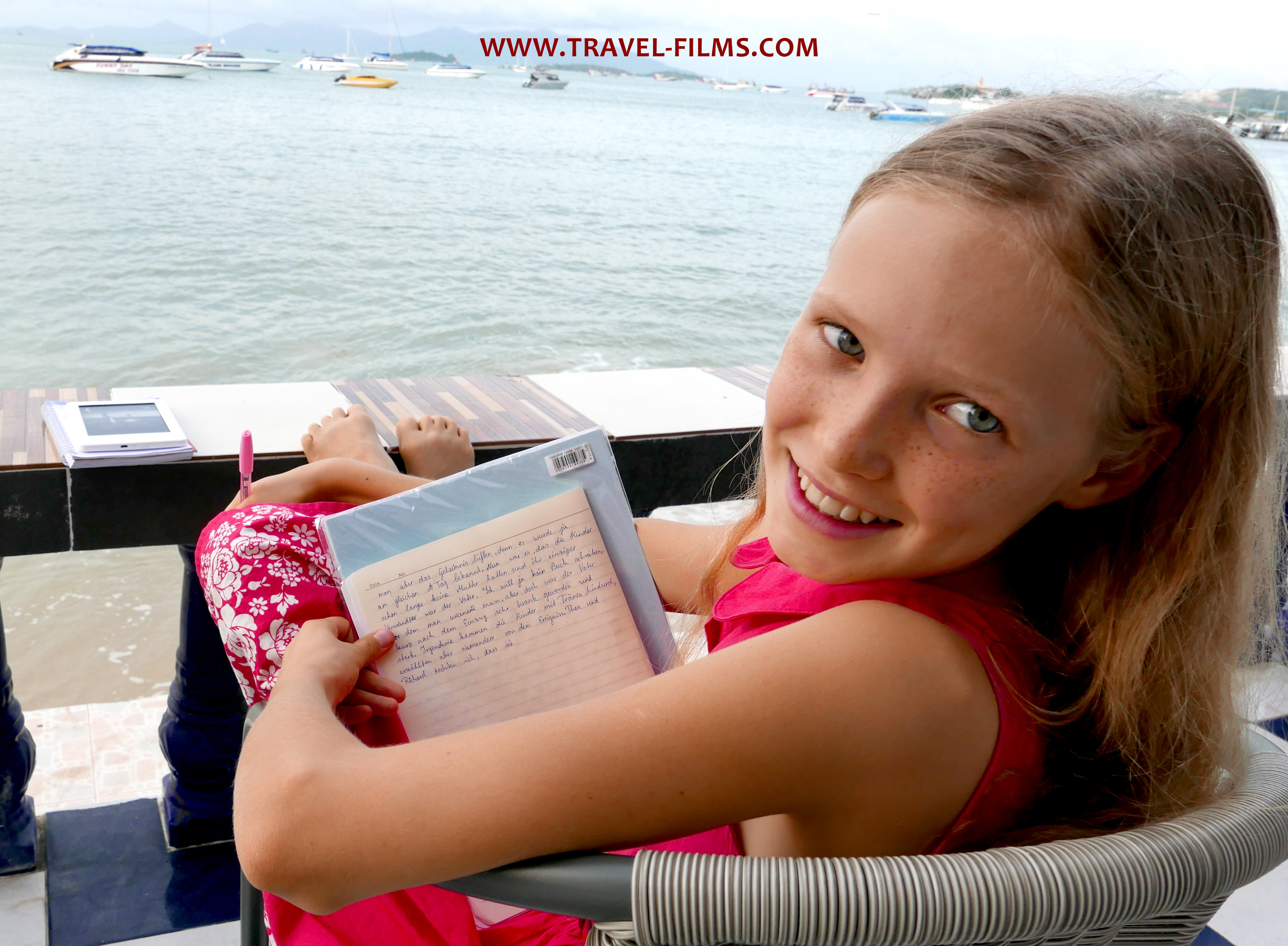 ENGLISH. After about 2 weeks of traveling, Anna started to English. With simple words and little strange constructions. But everyone understood her and she understood others - that was absolutely enough for the beginning. She was very happy with her English and wanted to talk more and more. She was convinced she was doing perfect. After 2 months Anna taught other travelers to play chess in a guest house. In English. This was a huge breakthrough and, very important by foreign languages - Anna had no language barrier an no fear to speak.

RUSSIAN. Before our trip, Anna could speak Russian, but could neither read nor write. It was very important to me to teach her to read and to write in my mother tongue. After 3 months of travelling she was able to read Russian fluently (Tom Sawyer was the first book) and write pretty understandably.

MATHS. After about 4 months (!!!) Anna told me that she finally understood what maths is about. I jumped for happiness, because the maths was our "problem subject". Right after that, we decided to make a vacation to celebrate our success! (Yes, even travelers need a vacation sometimes:)

Our Homeschooling start was not easy. We argued, reconciled, argued again, reconciled again. It took time for Anna to learn how to learn. And do it for herself and not for me. And I've learned how to deal with my too high expectations. 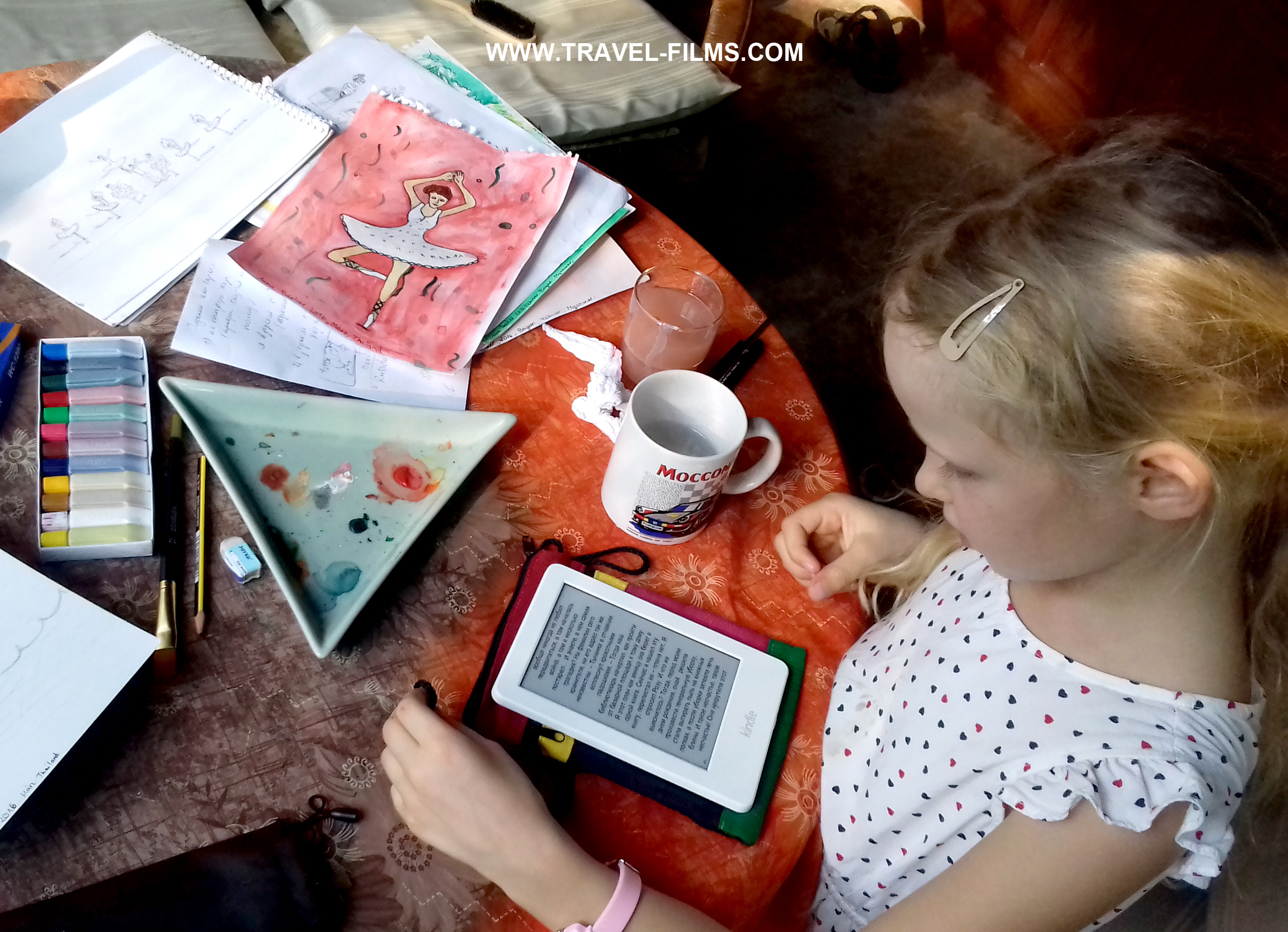 After almost 9 months traveling around in South East Asia (we traveled to 7 countries: Malaysia, Indonesia, Thailand, Myanmar, Laos, Singapore, Maldives) we came back to Germany. I was worried that Anna would have to go back to the 4th grade. But  the big surprise came - after a year without school, my daughter just joined her previous  classmates. After a year without school she became better in all subjects!

I was endlessly proud of both of us. And at the same time disappointed with the German school system. Anna's newly acquired joy in learning passed in the first few weeks. After a year in Germany, we decided to continue travelling. And we are still on the road. For almost 4 years now.

We both produced a documentary film about this first trip together: "Anna, Asia and I. 250 days on the road". Our film was screened in many German cinemas in autumn 2019 and was so well received by the audience! If any of you needs some inspiration - now  the film is available for download with English subtitles.

PS Oh, so that no questions remain open

3) Anna learned how to learn. Independently and with joy.

Our travel documentary film "Anna, Asia and Me. 250 Days on the Road" Part 1

We produced a documentary film about our first long time trip together - "Anna, Asia and Me. 250 Days on the Road". We screened this documentary in many German cinemas in 2019, and now it is available as a DOWNLOAD with English subtitles.

Here is the trailer.